How complicated is a rhinoplasty (or nose job) or septorhinoplasty (a nose job plus the septum)?

It’s one of the most complicated surgeries a plastic surgeon can do. I felt compelled to write this blog post after seeing someone in my office with one of the most unnatural post-operative noses that I have seen in years.

A “nose job,” otherwise called a rhinoplasty, is one of the most complicated procedures that a plastic surgeon can do properly. With that, I’ve spent my career striving to understand the complexities involved in performing a rhinoplasty. The challenge for any plastic surgeon performing this operation is achieving a natural appearance following surgery. Even before my plastic surgery residency, I saw noses that I thought looked different and strange… unnatural. Following my training, I understood they were poorly performed rhinoplasties.

What makes a good rhinoplasty?

To begin with, not everyone should have the same shaped nose. Noses should look different based on ethnicity, as well as a family’s genetics. Many people want to retain some of these features. They want to be themselves… only look better, breath better, or both. There are some nasal shapes as a result of surgery that no one is ever born with. Even broken noses do not result in some of the post-surgery deformities I’ve seen.

It’s difficult to make a nose beautiful – and natural – because of the number of “parts”. Not counting the septum, there are two bones and four cartilages (See drawing below). The septum has two bones and a large cartilage. The surgeon’s challenge is to reconstruct this puzzle and keep a natural ratio of each part to the others. Sometimes surgeons remove too much cartilage or bone in an attempt to create a smaller nose… what results is a deformity.

Many surgeons don’t understand that the septum does not go all the way to the tip of the nose, and the projection of the tip is from the cartilages in the tip and not the septum. What happens is that the surgeons remove too much cartilage from the tip, and this leaves the septum too high for the tip resulting in a “polly-beak” tip. See drawing below. This is a classic novice’s deformity. However, in some cases the tip didn’t have enough cartilage to begin with, and you have to take cartilage from the septum (which you won’t miss) and graft it to the tip for more projection.

Removing a hump that is too big can cause “saddle nose” when you remove too much. Once the hump is removed, the nasal bones must be narrowed to prevent a flat area from where the hump was.

If the nose has been broken, it may lean off to one side or be shaped like an “S.” Some of these noses cannot be made completely straight—maybe straighter, but not straight. It’s all like a symphony. The parts must work together.

What to expect and how long is recovery time?

These rhinoplasties or septorhinoplasties can be performed under sedation or general anesthesia. Generally, a splint is left in place for a week, and the nose will look strange at first, but after a few days much of the swelling subsides and you begin to appreciate your new look. Most swelling will be gone within 3 to 4 months, although some swelling is present for about a year.

The drawings below depict some of the shapes both before and after surgery. 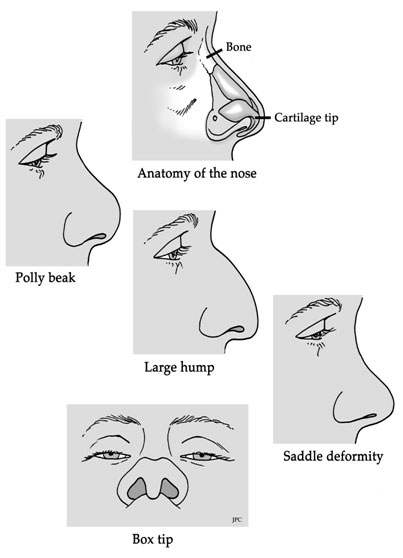