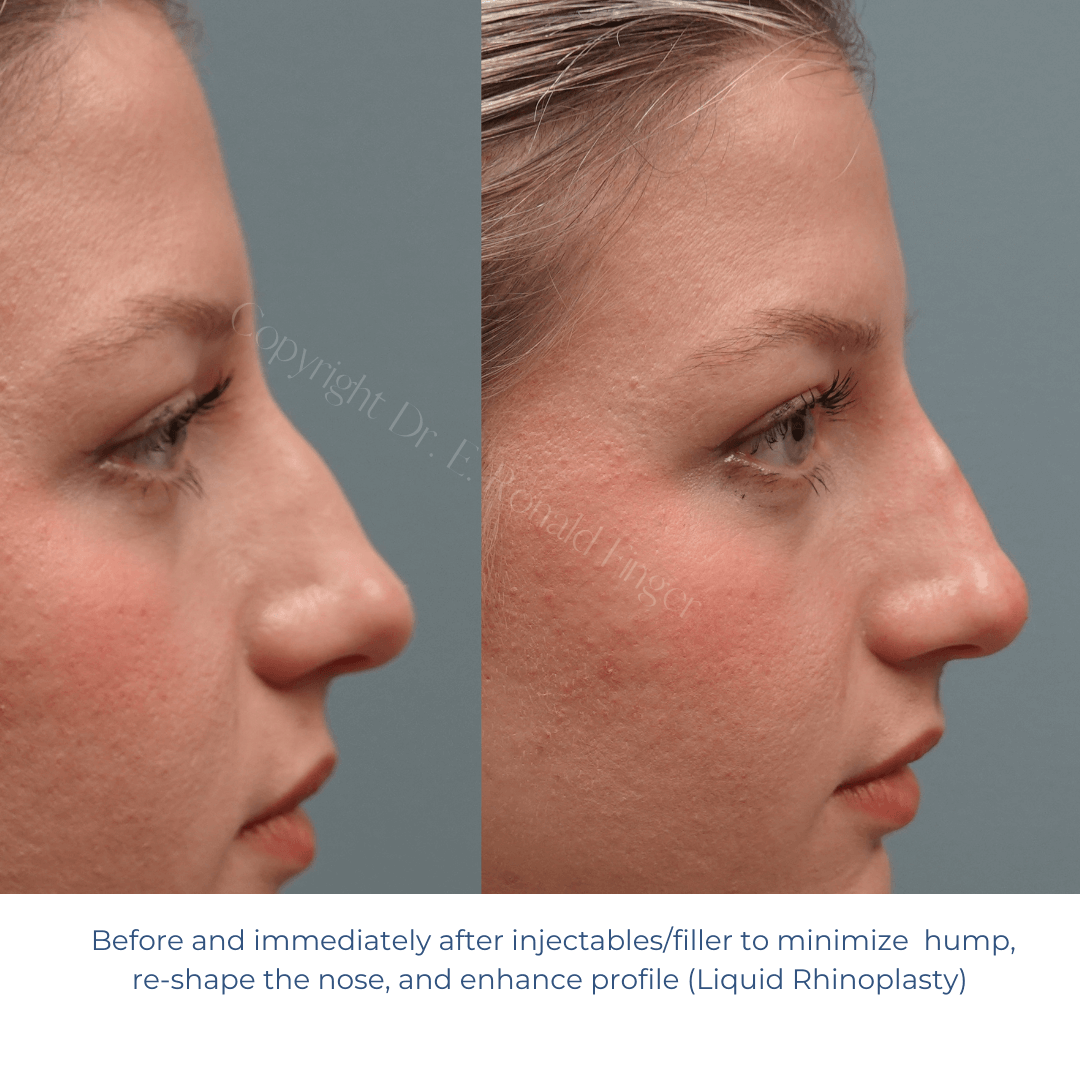 The non-surgical method using injectables to reshape & enhance the noseMost people are fully aware of the result of trauma to the nose; resulting in deformity, and breathing problems. But what happens to noses with age? Unfortunately, cartilage continues to grow with age whether it’s the nose (mostly the tip), the ears, and even the cartilage part of the ribs.

With severe nasal deformities from fractures, surgical treatment is generally the best solution, but not always the only solution. We often make improvements can often be made with what is called by some as a “liquid or non-surgical nose job.” This is basically injecting the various depressions with “fillers.” Often dramatic changes can be made with fillers alone in a few minutes.

The question usually arises as to how long it will last. My suggestion is to inject the nose with a filler that lasts between 1-2 years to see if the result is satisfactory, and if it is, then the next treatment can be injected with a filler that can last for 5 or more years. The shorter-lasting injection is usually a hyaluronic acid filler such as a Restylane or Juvederm product. An advantage of these fillers is they are reversible by injecting a special enzyme. The longer-lasting filler, e.g., Bellafill, is not reversible, which is the point of trying the shorter-acting filler first to see if the result is satisfactory.

This beautiful young lady featured here, wanted to reduce the hump in her nose, which was achieved using a non-permanent filler. The results will further improve over several weeks after initial injections. Dr. Finger usually follows up around 2 weeks after and decides if more filler is needed at that time. 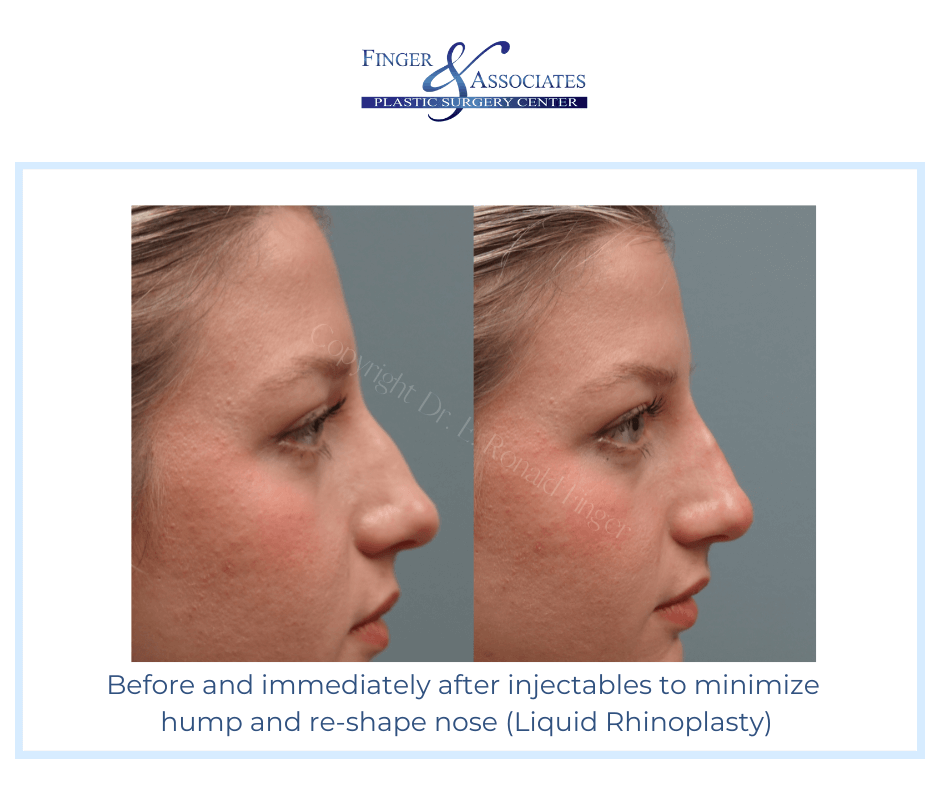 Regarding discomfort, a “numbing cream” can be used prior to the injection as well as the application of ice, which works quite well.

Liquid Rhinoplasties can be effective at straightening some noses, e.g., by filling in certain depressions. 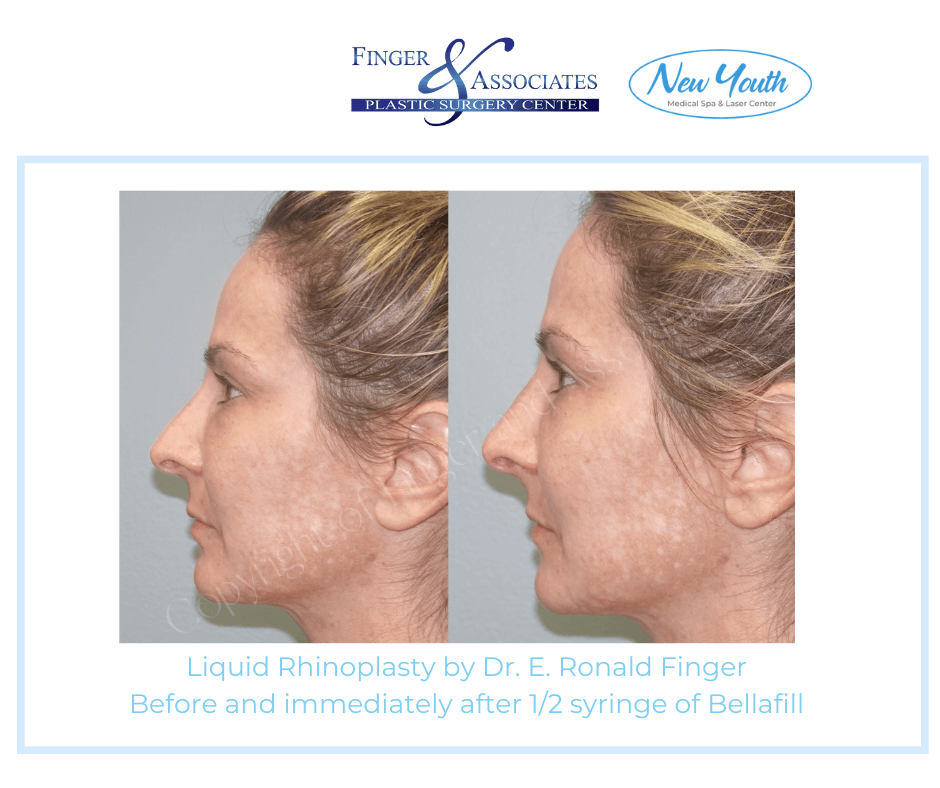 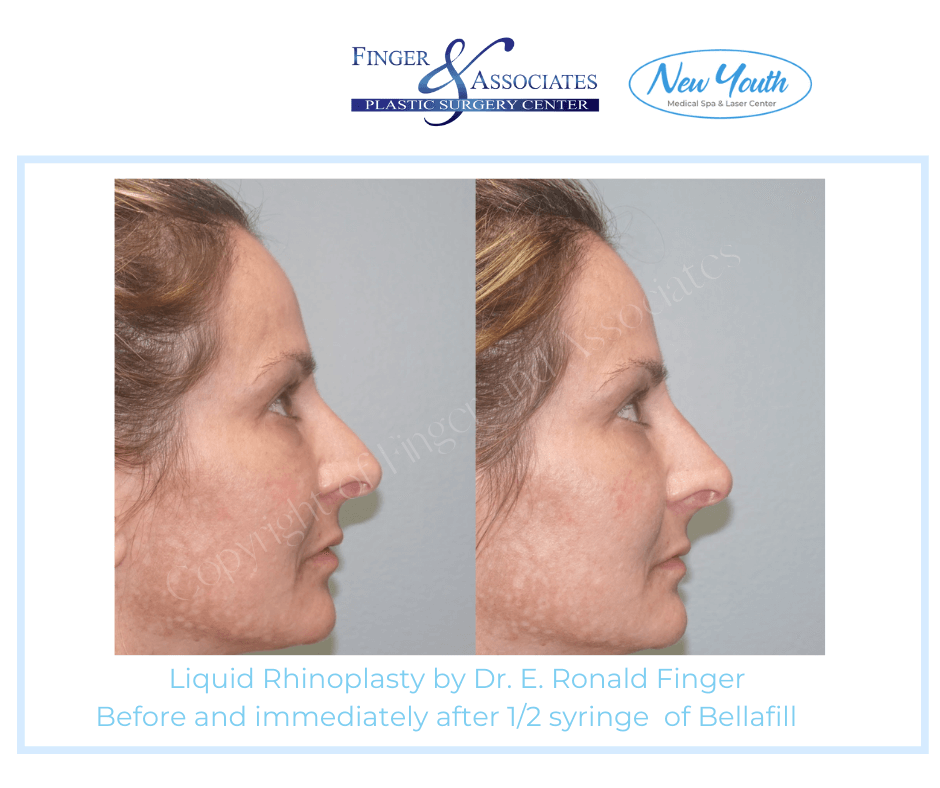 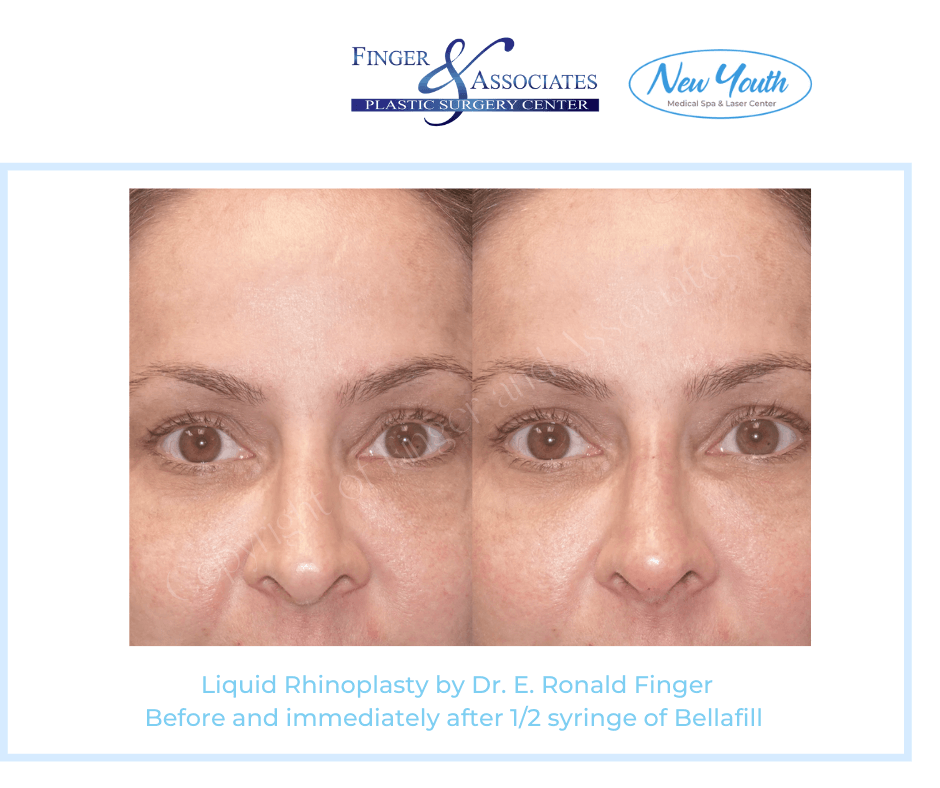 Minutes after Liquid “nose-job.” The hump is reduced, and the tip is more refined and turned up.

What can be accomplished with a Liquid Rhinoplasty?

Even the dreaded humps can be reduced by elevation of the nose area between the eyes, called the root, and elevation of the tip of the nose. It’s very common for the tip of the nose to have an insufficient projection, making the hump look larger. This combination of a filler in the nasal root and the tip can hide a significant nasal hump. Additionally, with age, the tip of the nose droops from the growth of the cartilage of the nasal tip and loss of bone in the maxilla (the bone that houses the upper teeth). Some of this can be corrected with fillers, but if it is severe, the cartilage may need to be trimmed and the hump removed surgically.

As with all cosmetic surgery, each patient is different, and the liquid rhinoplasty must be individualized. Non-surgical nose treatments are often possible, and the recovery time is almost nonexistent.

If you are interested in learning more about this procedure, book your consultation by phone 912-214-3779 or submit your information and preferred date and time online.

What is the difference in injecting fillers in a men and women?